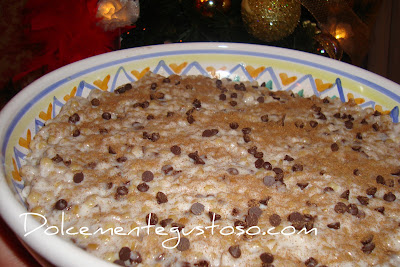 A bit of history:

The cuccìa is the traditional dessert of the feast of Saint Lucia and its preparation is almost a ritual in the Sicilian family.
It is said that many centuries ago in Sicily there was a long famine and people died of hunger. People then prayed to ask God's help and the day of Saint Lucia, December 13, arrived at the port of Palermo, a shipload of grain.
The grain was immediately released and people were so hungry, not to lose more time to grind and turn it into flour, then into bread or pasta, cook it as it was.
Since then, in token of gratitude on the day of Saint Lucia, considered the architect of the miracle, do not eat bread and pasta, but "Cuccìa" from the verb "Cucciari" derived from "còcciu" what small grain.
Exactly the cuccìa but seasoned with various creams or milk or cheese is the traditional dish on this day. The same day, just because you do not eat pasta and bread, are prepared croquettes and flaky rice, cazzilli, the fritters, in short ... ... ............ as usual from a fact religious ends with a phenomenal binge.

To eat the kennel on the day of Santa Lucia, we must begin the preparation 2 days before. Wash the wheat, put it in a pan and cover with water. Let stand at least an entire day (I do one day before). When you need to cook the corn, add water to the pan (at least 4 inches above the level of grain), and cook over low heat for 3 hours, turn off and let stand for at least 4 hours. Drain the corn well and add cold milk (leaving a little aside to dissolve the starch), sugar, cinnamon and starch dissolved in a cup with milk and set aside. Put it on low heat and begin stirring until it thickens. Allow to cool and add the chocolate drops.
Invia tramite emailPostalo sul blogCondividi su TwitterCondividi su FacebookCondividi su Pinterest